Built with Posthaven
Theme based on Lanyon by @mdo

The summer after my freshman year of college, I moved from Pennsylvania to Orlando to work at Walt Disney World, and I spent a lot of time out in the sun, which I was not used to doing. After about a month in Orlando, I noticed strange blotches all over my chest, neck, and shoulders. This rash was not only unsightly but also started to get itchy, but as a poor college-age intern, I could not afford to see a doctor. Determined to figure out what this new skin condition was, I headed to the internet and spent a nauseating hour scrolling through hundreds of images of various skin conditions. When I was about to give up, I stumbled across a photo that looked exactly like the rash on my torso. The condition was called tinea versicolor, a common skin rash that affects up to 8 percent of the United States population.

Tinea versicolor is caused by the proliferation of a fungus called malassezia furfur, which is a member of the yeast family commonly found on human skin. Some individuals are susceptible to an overpopulation of this fungus on the skin, and when overpopulation occurs, a skin rash is the result. Since tinea versicolor is caused by a fungus, the condition is usually treated with anti-fungal medications. These medications come in two forms-pills which you take orally, and creams/sprays which you apply directly to the affected area. The condition usually clears up quicker using topical treatments, however many people prefer the convenience of swallowing a pill. Anti-fungal pills are not available over-the-counter, so if a pill is your preferred method of treatment, you'll need to see a doctor. If you are willing to try a topical medication, however, you have options. You could of course go to your doctor and get a prescription cream, but this cream is likely to be expensive and have an ingredient that is readily available over-the-counter. Your best bet to treat tinea versicolor is to head to your local drugstore or grocery store, where you'll find a host of over-the-counter anti-fungal concoctions.

You will find anti-fungal medicine in two main types of products: athlete's foot/jock itch cream, and anti-dandruff shampoo. Let's talk about the creams first. Athlete's foot and jock itch are conditions that are cause by funguses similar to the one that causes tinea versicolor, so the treatments for these two conditions can also be used to treat your rash. Athlete's foot and jock itch treatments come with a wide variety of active ingredients and any one should be effective in treating tinea versicolor. Lotrimin and Lamisil are two common brands you can look for, and these creams can usually be found in the "Foot Care" section of the store near the shoe insoles. Remember, if it says it will cure athlete's foot and/or jock itch, it should work for your purposes.
To treat using a cream, just rub a small amount into the affected area once a day until the rash disappears. It could take 3 weeks or longer for your skin to return to normal, but you'll start to notice an improvement relatively quickly. Remember that some of the creams are slightly greasy, so be sure to allow them time to "sink in" and dry before putting on clothing over the affected area. If tinea versicolor is affecting a larger area which is inconvenient to apply cream to, try using an athlete's foot spray, since you can treat a much larger area more quickly using a spray.

The other product you can use to treat tinea versicolor is dandruff shampoo which contains selenium sulfide, and the one that most people will be familiar with is Selsun Blue. To treat using Selsun Blue, spread a thin coat of the shampoo over the affected area and allow it to dry for 15 to 20 minutes. Then you need to shower or rinse off the dried shampoo, and repeat this process once per day for 2 to 3 weeks. Again, users of this method should see their tinea versicolor rash start to fade relative quickly, although it may take several weeks for the skin to return completely to normal.

Treatment with Selsun Blue is less convenient than treatment with a cream, since it involves having to apply the shampoo, sit without touching anything for 15 minutes (since you'll literally be bright blue), and then wash it off. On the flip side, a bottle of Selsun Blue is about the same price as a tube of cream but will last much, much longer, which makes the dandruff shampoo treatment for tinea versicolor the most cost-effective option of all.

Once your tinea versicolor has completely faded, you can stop with the daily treatments, however you'll want to follow the same steps and apply the cream/shampoo once or twice a week to keep the fungus at bay. Most people who suffer from one outbreak of tinea versicolor will have future outbreaks, although these tend to get less frequent with age. You can also keep tinea versicolor from returning by washing all of your clothing, towels, and bedding in the hottest water possible (with bleach is even better), which will
help you from being "re-exposed" to the fungus. If another rash does develop in the future, you can follow the same treatment steps listed above and you will once again be free of tinea versicolor in no time.

Treating Tinea Versicolor: How Long Should I Leave Selsun Blue on My Skin? 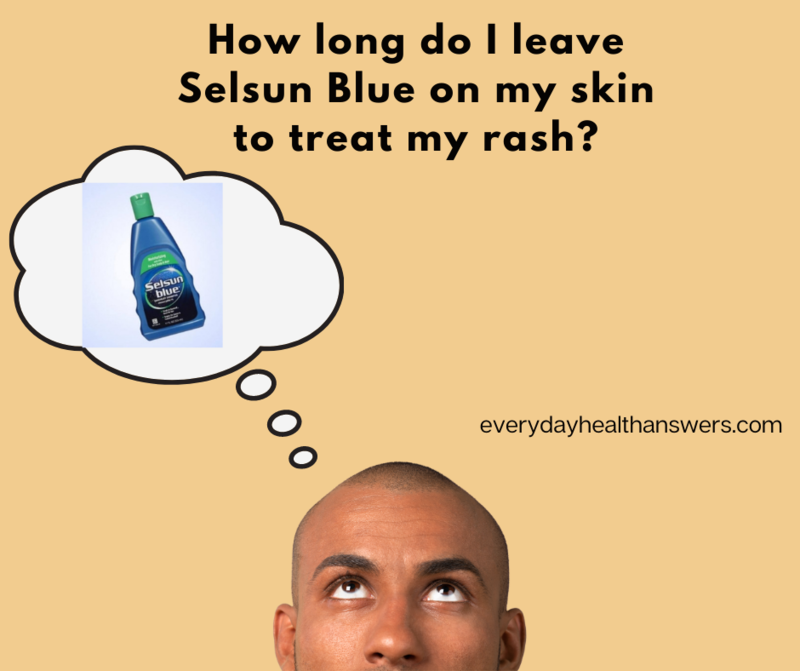 Unfortunately, you need to know exactly how to apply Selsun Blue to your skin to treat tinea versicolor, and the instructions for this are not on the bottle since the product is marketed for use in the hair.  Selsun Blue should be applied to dry skin to clear up the tinea versicolor rash.  The shampoo is thick, sticky, and blue, so this can be a messy process.  Most people find it convenient to apply Selsun Blue to their skin just before showering.  Once you have covered the entire rash with a thin layer of Selsun Blue, you need to allow it to dry on your skin for 10 to 15 minutes.  After this amount of time, you can take a shower and rinse the shampoo off of your skin.

Many people are tempted to leave Selsun Blue on their skin for hours, or even overnight in an attempt to clear up their rash faster.  Not only will this not help your skin return to normal any faster, you're likely to get a chemical burn in the process.  Selsun Blue should be applied to the skin for 10-15 minutes per day, everyday for two weeks.  Most people with tinea versicolor will find that their rash has disappeared within that time frame, but for some people it may take a little longer.  If your rash hasn't completely cleared up within a month of Selsun Blue treatments, you should see a doctor because it may not be tinea versicolor after all.  Once you have gotten rid of the rash, you can repeat the Selsun Blue treatments every week to keep the fungus from returning.  By following these simple steps, you can treat your tinea versicolor at home without the need for an expensive doctor's visit or prescription.